Dave has his work in many private and municipal collections.

Here are some of the most prestigious:

Her Majesty the Queen’s Royal Collection. 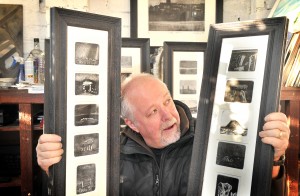 The Palace of Westminster. London 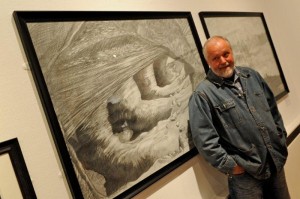 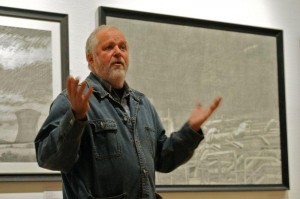 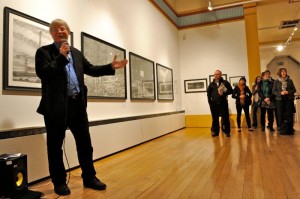 1986 Major Commission ** The Area Museum for the South west of England commissioned me to produce ‘on site’ works at all the leading ancient sites from the Scillies in the West to Stonehenge in the east. The commission took two years to put together and toured the west country for eighteen months.

1987 Commission** in co-operation with National Museum of Wales to work ‘on site’ at all their leading ancient sites. Took two years, over ninety works were made. They never toured as intended due to lack of resource from the Welsh Museum system. National Museum saved the day by purchasing several for their permanent collection. All this work to date has not been seen in Wales. 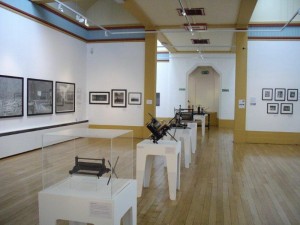 1991 Commission To produce a large drawing for the new interpretation CENTRE on Wrens Nest. The

project at the last minute. All the drawings made of the limestone mining were never purchased as promised. All very political because of the caverns being ‘in filled’ at the time.

1994 One Man Show Wolverhampton Art Gallery linked in with ‘Scratching the Surface’ exhibition a residency with Colton Hills School in Wolverhampton.Fist massive residency combining music, ceramics, sculpture, on ‘site drawing’ over 600 students works were exhibited with 20 of mine.

1996 Exhibition ‘ Inside out’ Bilston Art Gallery. An exhibition created from a residency at Featherston prison & Minerva Wharf Probation Service

1996 Selected by ***The Palace of Westminster from 6,000 artists to have work purchased for their

1999 Commission*** Walsall New Art Gallery to make a mixed media work from the gallery roof looking at the West Midland Panorama. The finished work took two months to complete and will be permanently installed into the Interpretation Galley A flip book of me drawing, and an interactive CD Rom makes for exciting listening and looking!

1999 Birmingham Museum and Art Gallery Included in their 20th Century

2000 Elected Assiciate Member of the Royal Society of Birmingham Artists.

2000/2001 Year of the Artist Award from the British Arts Council to produce a six steel panel etched instillation as a memorial to the workers of the West Midlands. The finished work will be installed in Bilston Craft GalleryWest Midlands. Project happening now until December. The work ended was exhibited here for 18 months instead of three months!

2002 One Man Show Devizes Museum Wiltshire.[June] Many Journeys, Many Megaliths.

2002 Working in Cyprus drawing the many tombs there.

2004 Working out in Korea at Bronze Age dated burial chambers.

2006 Working in the French Alps looking at Mt Blanc and surrounding landscape.

2006 Working in Cyprus looking at castles in the north, tombs and settlements.

2006 Permanently available in my own Church Hill Gallery Ironbridge.

2007 Merryfields Special School, Newcastle –Under Lyme commission Dave to create a large steel etched sculpture with pupils there. The finished work is now hanging in the entrance to the school

2007 [ongoing now] Commission and Residency Ironbridge Coalbrookdale Infant and Junior School– to develop drawing, and printmaking with the children to help create and design decorative images for steel etched panels . Dave has been commissioned to create four steel constructed arches which will hold 64 acid etched polished steel panels. The archways will create an attractive entrance to the Dale St side of the school. Dave is also making four large steel etched plates which will have images of local industry and landscape. The larges plate will be permanently attached to the fence between the archways.

2008 Tenbury Wells Project– working with five schools and local community to created seven steel etched panels to be placed throughout Tenbury to lift its profile and create a trail of visual splendor. [March– July]

2011 Retrospective at Bilston Craft Gallery. All my leading works about ancient sites, and industrial landscape over the past thirty years.

I continue to travel to record as a fine artist the wonderful ancient legacy left for us to wonder at. I also love painting out in Shropshire in all weathers. I have maintained contact with South Korea and intend to travel back there to draw more burial sites on the mainland with the help of Mr Sun Man Kim a great friend who I met whilst working out there in 2005. Lets hope North Korea calms down and things can get back to normal soon.

I have recently travelled to many outstanding ancient sites in the Mediterranean.  As a young boy I visited temples on mainland Greece and Crete. The pull to go back has always been there so the last few years has been exciting re living a dream and actually drawing out there discovering ancient sites forgotten for many many years, Crete has been an inspiration to me. Northern Cyprus has many ancient sites worth looking at and I have been fortunate enough to go there and work. I continue to draw out in the landscape in Wiltshire and the South West and have recently made a series of paintings about Victorian structures to be found in and around the Ironbridge Gorge.

I continue to hand build my printing machines which I love to do. They now sell all over the world, so the dream I had years ago of making printmaking affordable to all artists is working! Etching, drawing painting and making steel etched images combined with press building is a fantastic way to travel through life. Working with my family in our art business makes me so proud.

News and the future:

2012  June – The Queen accepted 60 more ancient site etchings into the Royal Collection!  A total of 110 prints reside at Windsor now.

2014  April/May  Opening of our ‘New Gallery’ in Ironbridge on the Merrythoughts site in the Old Brewery. We will be the biggest  contemporary gallery space in the West Midlands and Shropshire offering changing venues, a state of the art printing studio, conservation framing framing, Giclee printing and rentable studio space for artists. Also new work from the Gunnings, Wow can’t wait!!

2016   Exhibition with David Inshaw and Rob Poutney at Dorchester Museum.  Dates to be announced.

A wonderful printing machine. Chunky, fun to use and prints like a dream. Bed size 12 x 30 inches / 30 x 76.5 cm. Easily prints A4. Very portable. Good for workshops or the travelling pri...

View Etching Press
Opening Hours of Our
Gallery in Ironbridge